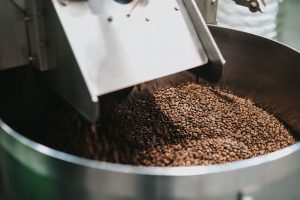 Since 1902 one Lincolnshire business has been going the distance when it comes to bringing us the very best from the tea and coffee industry. So, as we raise a cuppa to International Coffee Day for the fourth year running, what better time to introduce another of our passionate and dedicated suppliers – Stokes Tea and Coffee.

Proud to serve Stokes products throughout the hotel, the Pig & Whistle and our restaurant, The Portman, the relationship we have with fourth generation owner, Nick, goes back much further than our time here at Healing Manor. For more than 20 years Steven Bennett has been a firm supporter of Stokes’ products and ethos, never wavering when it comes to championing the brand and its products. 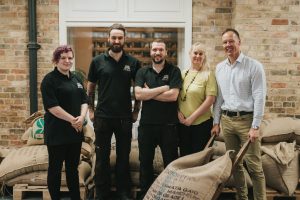 As rich in history as its products are in flavour, Stokes is a business built on heritage and the values that come with more than a century of work. Family run since its fruition, the story of Stokes Tea and Coffee actually began in 1892 when Robert William Stokes – Nick’s great grandfather – moved to the city of Lincoln. While Stokes’ much-loved café at High Bridge wouldn’t open for another 45 years, a 20-year-old Robert began working at a grocer.

After a decade of hard work Robert took the reins of the business and in 1902 began to indulge his love of the finest teas and coffees.  When people got a taste of his expertly roasted coffee word spread, and awards soon followed, prompting the purchase of the very first Stokes café – the building next door to High Bridge. The Arcadia as it was named saw many customers come and go over the years, even royalty – namely Prince George VI, future king of England.

The years went by and 1937 saw Robert become a grandfather to David, the creator of Stokes’ famous Blue Mountain Blend, and up sticks and move into the now legendary High Bridge café – a location which, over the coming years, was privy to many many unusual happenings. From bombs being dropped in the Witham during the Second World War and Robert’s son Major Robert Donald Stokes being killed in action on the final day the enemy were driven from Conteville, Normandy to pipes freezing solid during the Big Freeze of 1947 and even the river being drained. But no event hit Stokes’ harder than Robert’s death in 1957.

That said, in the void left by his passing, Robert’s children truly came into their own, taking the business from strength-to-strength and doing their father proud in the process. Children returned home from near and far – Robert’s son Osmond, known as Josty, fled the Mau Mau uprising leaving behind his beloved coffee plantation in Kenya; Stokes’ master roaster, Adrian was welcomed to the world; Florence Wright, a waitress at Stokes who stayed for more than 40 years invented Flo’s Mix – a blend of tea still loved today; and, little Nicholas Peel was born.

Nick grew up in the business, starting when he was 15 with the café deliveries after school. He worked in the kitchen on weekends and then learned the process of roasting coffee during school holidays. Although, initially embarking on a different career, Nick came back to the business to work alongside his dad and brother in 2004 and together they began to develop different parts of the business. The hype around coffee came at just the right time and has allowed the business to grow to what it is today.

Fast forward to 2019, and today Nick heads up an incredibly talented and driven team, keeping the Stokes name alive. And, honestly, on the face of it little has changed. Awards still flurry in, the three cafes continue to thrive and the team still continues to give it their all, further their education in the industry and offer more, in turn, to their clientele – both retail and wholesale.

“The tea and coffee industry is constantly developing and has almost reinvented itself from its previous incarnation,” explains Nick. “The growth we are experiencing has largely been fuelled by growing demand for our products. To stay the same, in a growing industry, would in reality, be to shrink, so we are keeping abreast of developments within the industry and diversifying when we find something that we believe would fit with our set up and core beliefs. 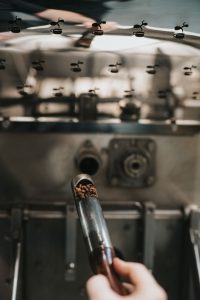 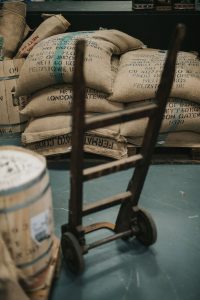 “We are a rare breed; in that we are still a family business who contribute to all stages of production – there aren’t that many companies out there who can say this.  Here at Stokes we are proud to say we source, roast, pack and deliver all our products from our roastery here at The Lawn.

“Local businesses are very important to us,” Nick continues. “We pride ourselves on supporting local wherever we can and our relationships with other East midlands businesses often go back decades. We like to understand the business we supply so that we can offer the most appropriate services and products for each establishment. For example, when we develop a bespoke blend for a customer.

“Many of the businesses we work with have their own blend created, a process during which we aim to work in partnership with that customer so that we create the perfect blend based on the client’s own specifications.  It’s always a joint effort and the process involves lots to toing and froing until the result is achieved. That way, the customer will know that their blend is unique to them, and the next hotel down the road, won’t be offering the same product.”

Of course, four generations, more than 100 years and many a brew later there are a few differences to how Nick runs the family business. Firstly, everything is done under one roof – at The Lawn head office – from the sourcing, blending and roasting to packing and brewing. What’s more, today Stokes’ coffee is roasted using the world’s most eco-friendly coffee roasting system – something you can actually watch taking place – a feat which has allowed the business to also employ its own engineers and run a fully accredited barista training centre. 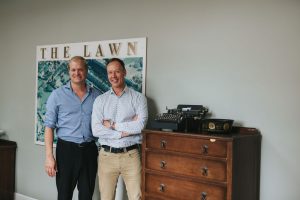 Nick adds: “We took on The Lawn development in 2014 when a lot of businesses were being cautious. This was somewhat of a gamble as The Lawn, as a commercial enterprise, had never really worked before for any length of time. As an independent, we were able to tweak our ideas to fit around the layout of the building by creating interesting uses for the various spaces available.

“As a business we were looking to expand the coffee roasting production side and The Lawn allowed us to do this by giving us the extra space we required while at the same time raising our profile. The 19th century building was so well known locally, we really wanted to stay in the city centre as we felt we were an integral part of Lincoln. We were able to open the new café on the site too, along with a training centre for budding coffee enthusiasts. We have really just followed the trends of the industry – seeing a demand for a training centre – where 20 years ago, this wouldn’t have been so relevant.

“Customers are becoming savvier when it comes to their beverages, so we are happy to offer them the knowledge they yearn. Our training team know all there is to know about what’s going on in the tea and coffee world and are, themselves, learning every day. It was also the icing on the cake, that the building had its own theatre and event space, offering a creative area of the firm, to develop.” 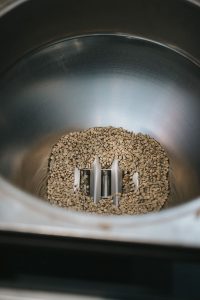 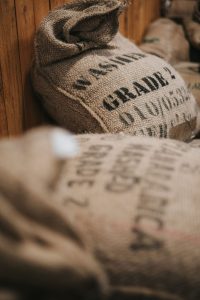 As far as traceability goes, Nick and the team purchase their coffee and tea through those companies that have direct links to the coffee farmers so they know where every penny goes, and where those leaves and cherries are coming from. Stokes’ has also forged relationships with organisations such as Fair Trade and the Rainforest Alliance and support charities such as Coffee Kids. 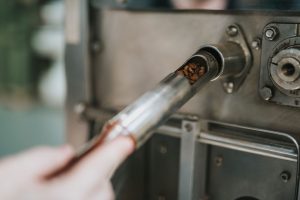 The Hidden Side of Hospitality | Meet The Team

The Hidden Side of Hospitality | Meet Harriet McHugh