Among the rolling chalk hills of the Lincolnshire Wolds, on a beautiful farm near Louth, lives a thoroughly Lincolnshire herd of cattle. Robust and deep ruby red in their colour, this particular 70-strong herd of Lincoln Reds grazes on the hillside of a very special place – the Dobson family farm. 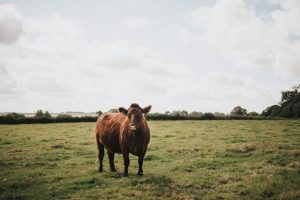 A place where passion, pride and a genuine love of these glorious animals, and their welfare, reigns on high, the farm and its daily activities merrily continue under the expert watch of Amy Jobe (nee Dobson). An agronomist by trade Amy has grown up living and breathing farm life. With her father having cattle of his own, albeit continental breeds, Amy has always loved cows but had long harboured a desire to do something a little bit different.

That’s where the Lincoln Reds come in and Amy’s russet beauties are something to be truly proud of. A product which tastes phenomenal, it more than speaks volumes for the people behind its production. These Lincolnshire Reds taste so good because of their story, because of the lovely life they get to lead, one which sadly not all animals in the production industry are privy to. And that comes solely from the hard work of Amy and her team.

The whole reasoning behind our ‘Meet the Supplier’ campaign is to showcase not only the faces and families behind the produce we serve, but also the often misrepresented honesty behind where our food comes from. There’s a lot of bad press about the meat industry at the moment, and even I’m pulled in by documentaries on Netflix. What you genuinely won’t grasp unless you ever meet Amy or visit her farm, is the sheer scope and supply chain. This isn’t factory and mass-produced, this is grass fed and cared for.

The reality of the industry is, people want to eat with a clear conscience, but they don’t want to pay the price for a truly transparent supply chain, as it isn’t always ‘cheap’. We’ve been featuring Lincoln Russet on our bar menu for almost 18 months in our steak burgers alongside some special dishes too. Rich in flavour, its distinctive taste is what customers always notice with Lincoln Russet. Our aim over the next 12 months is to introduce more cuts of Lincoln Russet onto our menus at an affordable but realistic price.” Steven Bennett, Chef Patron. 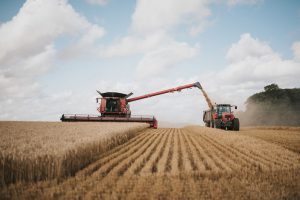 There’s no beating around the bush, if you eat meat you must understand that not only does that meat come from an animal but that that animal has a life for a purpose. The harsh reality though is that in today’s climate not all of these lives are equal – and that is where issues with the production industry and how it is viewed and valued arise.

As we progress further into a future where environmental awareness and addressing the affects our choices as a species have on humanity, much light has been thrown on meat production. Often unfairly. What about the producers who strive to put their animals first? The ones who put in the extra time to learn that extra knowledge, harbour that extra understanding and always go that extra mile, not only ensuring the animals they rear – the ones which we choose to eat – deliver an incredible product but go so far as to guarantee the animals themselves live THE best life they can, in THE best environment, with THE best welfare?

Well, our Meet the Supplier campaign has been designed to do just that, and Amy is one of a growing group who hold welfare, hard work and a love for their produce at the highest value.  It is grit and determination that have seen Amy get to where she is today, with her meat taking pride of place on dining tables, and a la carte menus, across the country – including ours. It’s not been an easy ride. Mistakes have been made, lessons have been learnt, but all for the better good for her herd and her product.

Lincoln Reds were once seen as the backbone of the county’s beef production. But with the dramatic shift in the landscape of the industry, the breed fell from favour with favour now leaning towards fast-growing continental breeds. Choosing to bring back the Lincoln Red was a conscious decision for Amy she wanted to do something different, something poignant, something that hadn’t been done on the farm before. So, instead of investing more into the continental herd her father had established, Amy started bringing her russet beauties in. Bringing back a lost Lincolnshire treasure. 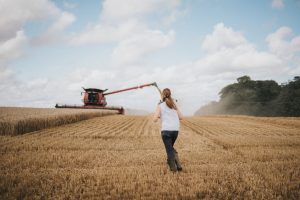 Grass-fed and living as much as weather will allow them to outside, every aspect of this herd’s life is designed to keep them happy, and for longer. As Amy explains: “Your average beef will grow for 14-15 months before slaughter. Ours will have 26-28 months. Everything is kept on the farm and grown on the farm. The cows and the grass which feeds them.

“As an agronomist I’m able to manage the grassland, the silage and the hay which feeds the cattle during the winter months. It enables our cows to be grass fed all year round which is so important – it’s being grass fed that gives our meat its flavour. That’s why the grass manufacture is so vital here. The benefits of grass fed far outweigh that of grain fed. The meat is higher in omega 3, the meat is leaner, it is higher in vitamins a and e and linoleic acid. Grass fed also has seven times the beta keratin in comparison to grain fed.

The result of all of this hard work and attention to detail is superb beef – full of flavour, marbling and with an incredible texture. No matter which cut, from steaks and brisket to stewing steak and chuck – which we use here at Healing Manor – it is all packed with flavour and melts in the mouth. Even something as simple as mince. 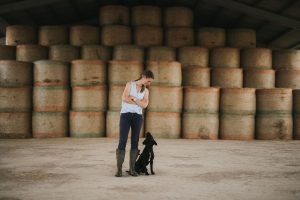 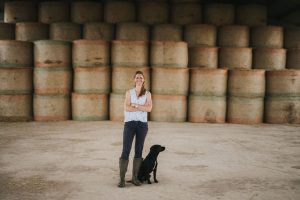 “A food shop staple a huge amount of the mince you buy from any supermarket is made up of mince trim, which is essentially the bits that are left over from the other cuts. My mince is made from my stewing steak – that’s it.

“Steve actually uses my chuck mince on the menu – which works beautifully. Prior to supplying Healing Manor I’d heard of Steve and basically stalked him for about six weeks until I took in a sample box and told him my story. He was on board immediately.

“Since then Steve has used my chuck mince. I feel that it was very easy for him to make the decision because of the quality. I loved what Healing Manor were doing and I love what they stand for – I still do. Everything is cooked, created and presented beautifully. I went to Healing Manor because I love their ethos. And I love the fact that Steve and Charlotte promote local. They stand by what they say and are proud to shout about what they do.” 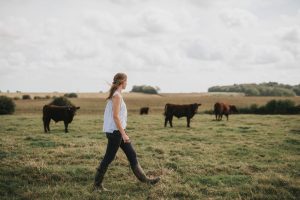 Amy’s first carcass went down to London in 2015. During that first year only two left the farm. Today, just four years later, four carcasses now leave the farm every month. With a herd of 70 and two beautiful stock bulls, Amy can calf the cows twice a year – once and spring and again in the autumn – the result of which keeps her herd numbers the same while slowing for demand to be met. Overall this means the quality of her herd’s life and the final product remains of the highest standard – nothing is compromised, and nothing ever will be. This is a farm where the animals come first.

To find out more about Amy’s story, her cows and to order products or gift vouchers please visit 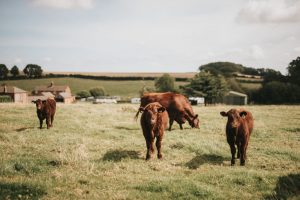