Fish, fish, fish… It’s a chant you’ll hear proudly echoing throughout Blundel Park stadium come a Grimsby Town Football match on a Saturday afternoon. A town that’s proud of its heritage, perhaps a little nostalgic, but present is a time where we as modern consumers opt for convenience.

Take a drive around Grimsby Dock’s and you’ll see businesses that still exist today. Sat amongst the wind power giants, and international food producers are independently owned fish merchants and smoke houses. Grimsby Fish market come 5am is in full swing. It’s an early morning trade, but an opportunity to see the graft and passion that still exists within the Grimsby and National fish industry today. 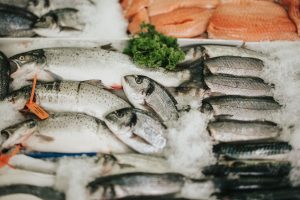 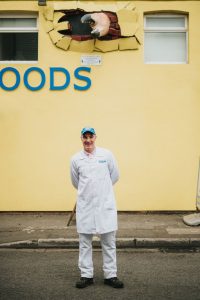 Grimsby Fish Merchant Premier Seafoods is run by Nathan and Julie, a family run business with a team that’s passionate and skilful. Nathan and Julie, residents of Healing, deliver fish to our door on a daily basis. They’re a company that our Chef Patron, Steven Bennett, The Lincolnshire Chef has worked with for years in old and current restaurant ventures. Premier Seafood, which is also known online as King Crab has been operating out of Grimsby for over a third of a century.

We’re all guilty of picking up just about the whole contents of our fridge from our nearest supermarket and racking up our point cards and money back vouchers. Whilst supermarket visits are a part of everyone’s weekly to-do list, there’s little transparency or at least a lack of knowledge when it comes to the true supply chain of the fish that’s proudly on display at the fish counters.

Nathan say’s “Supermarkets don’t like fish because it’s wild and uncontrollable: in other words they can’t dictate how we buy it. Most fish landed is still sold at auction and prices fluctuate dramatically, prices can change by the day and so can source.”

Whilst we talk about the seasonality of our ingredients, fish is one that’s often forgotten. It’s not something that we see growing, so there’s often a slight naivety, not only around its provenance and supply chain, but also how it’s cooked. Menus at the Pig & Whistle feature fish that’s seasonal, locally sourced and often filleted by our Grimsby fish merchants Premier Seafood. Whether it’s scallops and salmon they source from the Scottish coastline, brown crab from Whitby, Grimsby and East Yorkshire or flat fish from the south coast, there’s still huge amounts of fish that are transported into Grimsby Docks from all over the world, including;  Iceland, Norway, Denmark, Canada and the Faroe Islands . 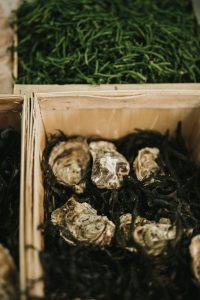 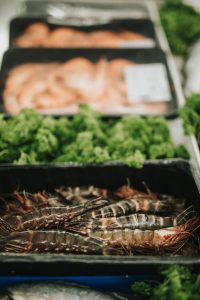 It’s factual that line caught lobsters from the British coastline are shipped over to Europe and cheaper lobsters are imported into England for the British consumer. It’s the responsibility of not only suppliers, restaurants and supermarkets to ensure that there’s traceability and transparency in the supply of our seafood, but also the consumers. Giants such as the supermarkets react to demand, it’s the likes of Premier Seafood’s who react to what’s readily available and seasonal, that add to the seafoods industrys mission to become more sustainable. 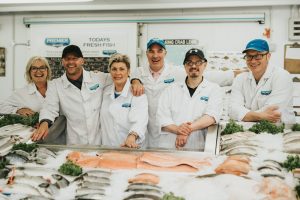 Nathan and Julie’s shop, Premier Seafoods is open to the public, or if you’re not anywhere near Grimsby, you can even order online for delivery straight to your door. For more information and to see what they currently have on offer, click HERE.

For more information about the seasonality, providence and supply chain of seafood, visit Seafish who are the public body behind promoting a more sustainable future for the seafood industry, from sea to plate. 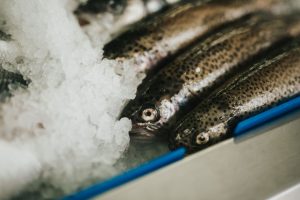 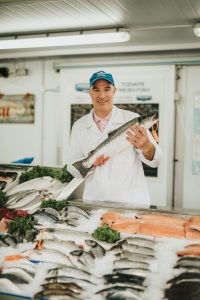